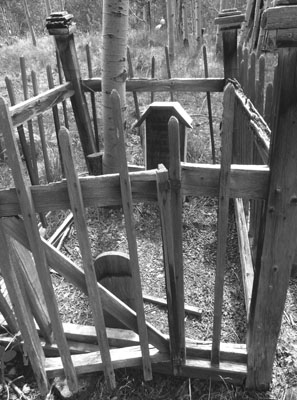 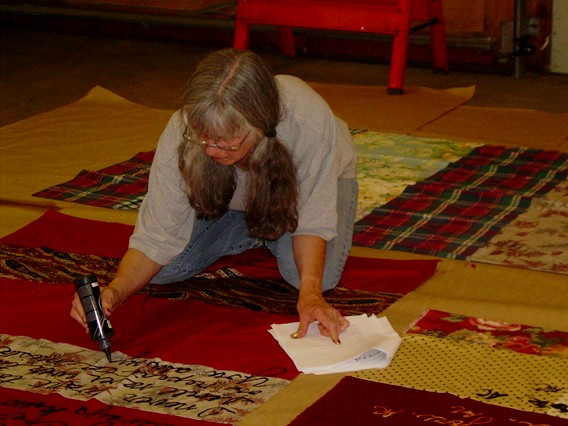 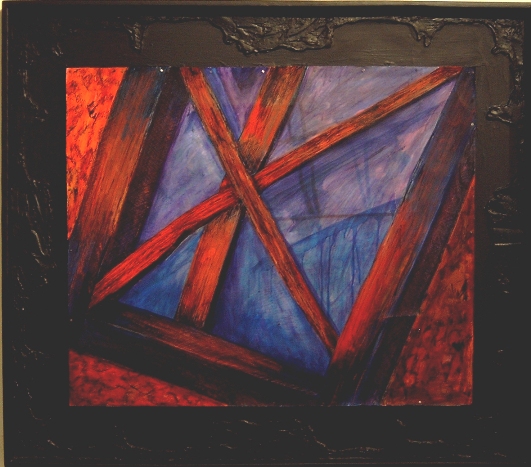 Fictions and Factions series
Uncle Ed in the Launch On stage My work usually originates with an idea/concept that is developed using materials that will best convey the concept.  I'm interested in social issues that impact society and the individual.  When possible, I try to use art as a way to connect to others.  I will be putting a link up to my blog so that you can see another side of me and write to me--or you can email me at jomacx@msn.com

News Releases for each body of work explains the images in the photos.  (That is, for those who are interested in explanations).  The photo titles correspond to the show titles.

In this exhibition Joan is showing thirty photographs of cemeteries from the Cimetière du Père-Lachaise and the Catacombs of Paris to Central City and other locations in Colorado and the US.  Most of the photos are black and white.  Each cemetery has its own defining characteristics—from formal, well manicured landscapes to cemeteries gone wild that are overgrown and untended.  The photos show the relationship of the setting to the architectural and sculptural memorials where statues abound and stones, grave markers, religious icons and edifices of marble, polished granite and even wood remain to remind of us of those individuals whose names are often meticulously carved in stone.

When three of Joan’s close friends died this year within a period of six months, thoughts of death and dying couldn’t be avoided.  The exhibition also opens just a few days after Dia de los Muertos.  The timing seemed right to do a show related to death and dying and to celebrate friends and family and others who have transcended this life.   In addition to the cemetery images, there is a wall dedicated to the people Joan has lost in her lifetime.  These images celebrate the lives of those who have died and juxtaposed with the cemetery photos connect to the collective consciousness of loss and the cycle of life.

The cemetery photos are mostly black and white with a few color photos that begged to be displayed with their colors intact.  Images were photographed with a digital camera and printed with archival ink and paper on an Epson printer.  All images are framed in 14” x 16” frames and dry mounted on museum board.

Persistence of Place is a new body of work that includes paper making, woodblock prints and a center of the room installation.  The work references a time and place in Joan’s life that has had a continuing impact on her thinking, art-making, lifestyle, and her feelings about the environment.  In this body of work, Joan tries to bring that connection into the gallery.  The persistent place is an island, McDonald's Island, in the delta of the St. Clair River in southeastern Michigan that her grandparents homesteaded in the early 1900s and where she spent summers exploring the land and waters as a child and teenager.  Her grandparents, aunts and uncles all had cottages on the island that was on the Middle Channel between Port Huron and Lake St. Clair. According to Wikipedia, it is the largest freshwater delta in the world.  Her father built their small cottage on the island when she was about three years old.   While growing up, she lived with her parents in Detroit, but on weekends and summer vacations, she spent most of the time at the cottage.

On McDonald’s Island, water, marsh, boats, family connections, fish, fireflies, frogs and other wildlife were part of the every-day experience.  Until she was eight years old, the island had no electricity.  Her father installed indoor plumbing when she was sixteen.  It was also a place where community was important; often the men in the family got together to help each other with chores such as building docks, adding rooms onto cottages, putting in break walls, building sheds, etc.  It was a different time in which material goods weren’t important; what was important were the relationships with family and with the land and water.

Boat building was something that was a McDonald family tradition.  Her great uncle, Zeke, was the family's master boat builder.  Joan's father, Lawrence, built boats in their basement in Detroit and she observed the process as she was growing up.  Her Uncle Robert and her Uncle Harold also built boats.  She decided to continue the family boat building tradition and created several small handmade paper boats and embellished them with embroidery and beads.  The boats utilized cattails in the paper.  Cattails/bull rushes were a native plant that grew everywhere in the St. Clair Flats.

This new body of work uses a variety of media and she hopes it will resonate with others and remind them of their own special places, their connections to nature and the importance of having natural environments that remain untainted for future generations.

The NEFA project has involved many people in its various phases.  It began with the artist passing out, emailing and Facebooking friends and acquaintances, as well as posting in various venues, a request to write sentences with the words “never, ever, forever or always.”   She has collected approximately 1,000 sentences.  The next phase was to use the sentences in a performance art piece that was performed at Denver’s Civic Center Park on September 10, 2011.  There were approximately 27 people (Cheryl Bailey, Susan Berkley, Betsy, Mark Brasuell, Jane Davis, Dante Husak, John Husak, Jordan Jones, Matthew Pompoino, Sara Sanderson and her Metro State drawing class) in the performance, which was an orchestrated reading of the words and sentences.

At the performance, an audio recording was made with the voices of the performers which, in turn, was edited into the soundtrack for the installation at Edge Gallery.  The sentences are also being used in the installation—they are written on fabric panels that hang in the gallery.  They are also painted on the floor and are part of an artist’s book that will be on display in the gallery, along with photographs of the performance taken by Cheryl Bailey and Matthew Pomponio. The installation creates a feeling of inclusion and harmony within the Edge Gallery space.

This project is as much about the final installation and artist’s book as it is about the process of involving others in the artist’s creative process.  Art has the ability to make connections between people and the NEFA Project allowed others to participate in the creative process and see the tangible results of their contributions.

After November 11, there will be photos in the photo album of the installation.

The Potential of Broken

New assemblages using a variety of materials from eggshells and fine china to rusted steel  and plaster combine to make a cohesive body of work centered around the idea of “broken.”  From broken relationships and broken government to broken china, the pieces echo the lines from the Bob Dylan song, “Everything is Broken.”  Beyond deconstruction is reconstruction—rebuilding and making better from what has gone before, whether referring to items from the physical world to abstract ideas, policies,